The crossbow sport is versatile and offers the shooter a large model choice between compound, recurve and pistol arm crossbows. Initially, short range shooting is fun, but with time you need new challenges. However, it is extremely difficult to hit the target accurately over a long distance because many factors influence the result. Riflescopes can be a great help. Riflescopes and red dots also help to accurately aim at the target. Shooting during the day is one of the easiest exercises for most shooters after a short time. If, on the other hand, the lighting conditions are worse, the whole thing becomes much more exciting. An evening training with 3D animals simulates hunting in the dark. In the dark, illuminated reticles, high-quality night vision devices and rangefinders make it much easier to aim at a target.

In order to reach your target accurately, depending on the desired distance, a telescopic sight is essential. The individual brand manufacturers of your crossbow, such as Excalibur or Barnett, have therefore developed their own rifle scopes, which perfectly complement their crossbows. But other companies like X-Scope and Hawke, who specialize in special crossbow visors with multiple reticles, also offer high-quality accessories for your sport. Various lens diameters and magnifications perfect your shot, and you can add extra focus with a red dot. As the reticle is represented by a light spot projected into the visor, you can aim at targets at shorter distances as quickly as possible. This technique will not only make your shooting experience easier, but also more beautiful. In addition, Bushnell or Hawke rangefinders and night vision devices are ideal for night owls who want to go stalking in the dark.

With a riflescope, red dots, additional range finder or night vision device, your crossbow is perfectly equipped for all distances and lighting conditions. Discover new aspects of crossbow sports and secure the perfect shooting result day and night with extensive accessories from our online shop. So you can easily improve your precision and hit rate. Once you get used to it, you won't want to miss this shot feeling anymore. 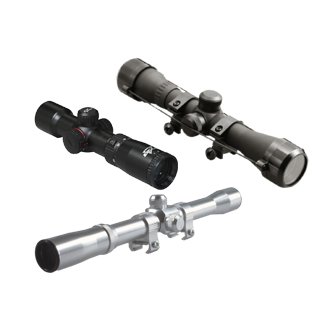 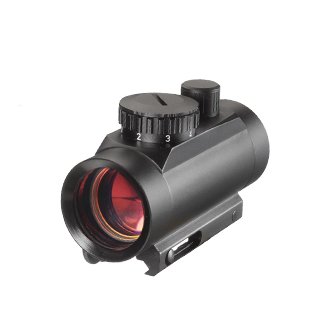 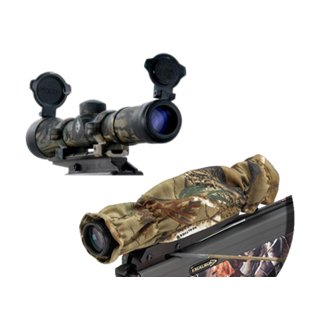 Riflescopes, red dots and illuminated dot sights for the crossbow

If you're already a proud owner of a crossbow or about to buy one, it's best to start thinking about buying a suitable aiming device right away.

After all, even the best and most expensive crossbow on the market will not convince you with impressive hits if the model is not used in combination with suitable telescopic sights.

Naturally the shooting a crossbow is also possible without a rifle scope or a luminous dot sight. But with the results, you will most likely not be able to win a flowerpot. With increasing distance to the target, the dispersion circle would become so big that even hitting the target would be a matter of luck.

Depending on the scope of delivery of the crossbow, you can sometimes find simple rear sights and front sight attachments, but even with this simple sight, it is very difficult to shoot precisely at medium or long distances, accurately and reproducibly.

Some of you may know this very simple alternative of a targeting device from shooting with an air rifle in your garden or courtyard. As well as many nice memories, the wobbly and nerve-racking setting of the rear sight and the front sight is also certainly in your memory.


What kind of target devices are there?

Last but not least, your crossbow bolts will thank you if you buy a rifle scope or a red dot in the near future. Bolts that do not reach the target because of a missed shot are usually just a case for the waste.

If you take a closer look at the topic of the rifle scope, you will quickly notice that the selection of models and different techniques is quite extensive. In addition to the riflescope or scope itself, you can also purchase the so-called Red Dots.

But whether it's a rifle scope or red dots. Both aiming devices have the basic task to support you in aiming at the target in order to significantly improve the hit pattern and consequently the results. We would like to explain in more detail two models differ from each other with the following articles.

The rifle scope for the crossbow

The riflescope is probably the best known and most common target device, not least thanks to film and TV. The exterior of the riflescope consists of a tube, which in most cases is made of black matt anodized aluminium. The adjusting wheels for the adjustment of the distance are placed noticeably and clearly visible from the outside.

The reticle is the crosshair that becomes visible when looking through the scope. Compared to other models, riflescopes for crossbows do not have a single crosshair. This is for the following reason. Since the crossbow has to be held higher when shooting at greater distances, most crossbow riflescopes have several vertically arranged markings, each of which can be shot at a fixed distance.

Depending on the equipment and scope of the function, the reticle of the telescopic sight can also be illuminated in various colours and intensities. This has the advantage that the reticle produces a better contrast in poor lighting conditions.

A riflescope would not be a riflescope if it did not have an optical magnification. This is probably the most important characteristic of a rifle scope. Depending on the model, the scope has different magnification levels. 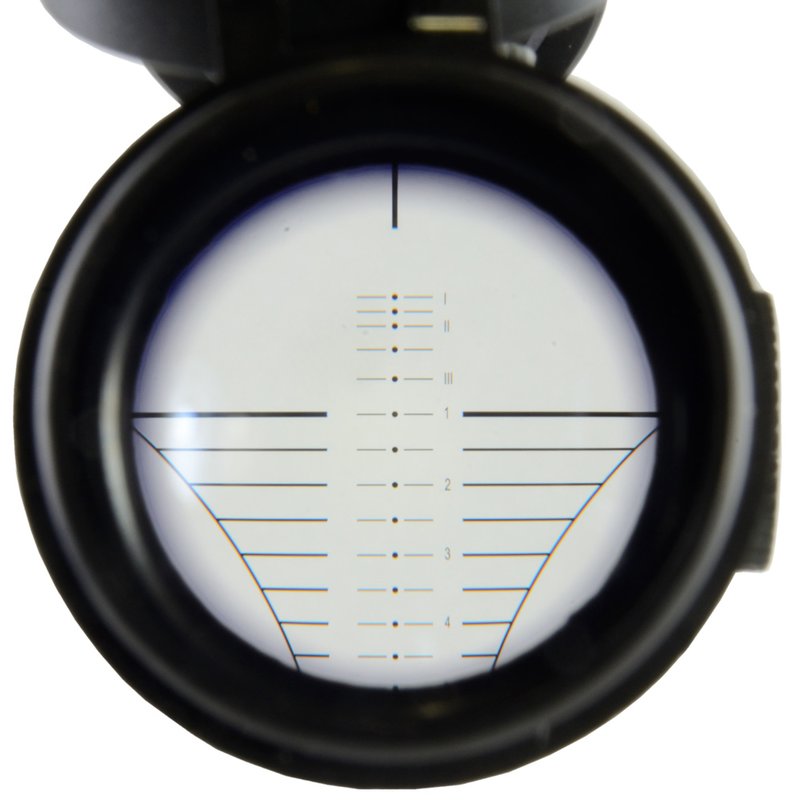 The Red Dot for the crossbow

The Red Dot, also known as the illuminated dot sight, is quite compact when compared to the riflescope. The Red Dot also has no reticle or crosshair, as known from the riflescope. Instead, a light source built into the housing of the Red Dot ensures that the points of light needed for aiming are projected onto the lens. The shooter perceives this projection as a small point that he uses to aim at the respective target. Depending on the model, one or more points of light can be generated, which can be shot in for a certain distance.

In contrast to the riflescopes, the Red Dot has no magnification. Although there are a few illuminated dot sights with a small zoom, the use of a Red Dots is more suitable for nearby targets. The Red Dot complement each other perfectly with the small and compact pistol crossbows. The pistol crossbows are typically shot with the arm stretched. The mounted visor can therefore not, as with a rifle or a large crossbow, directly in front of the eye. Rather the aiming device is aimed by the stretched arm from a certain distance. This combination benefits the Red Dot and makes the illuminated dot sight the perfect partner for pistol crossbows. 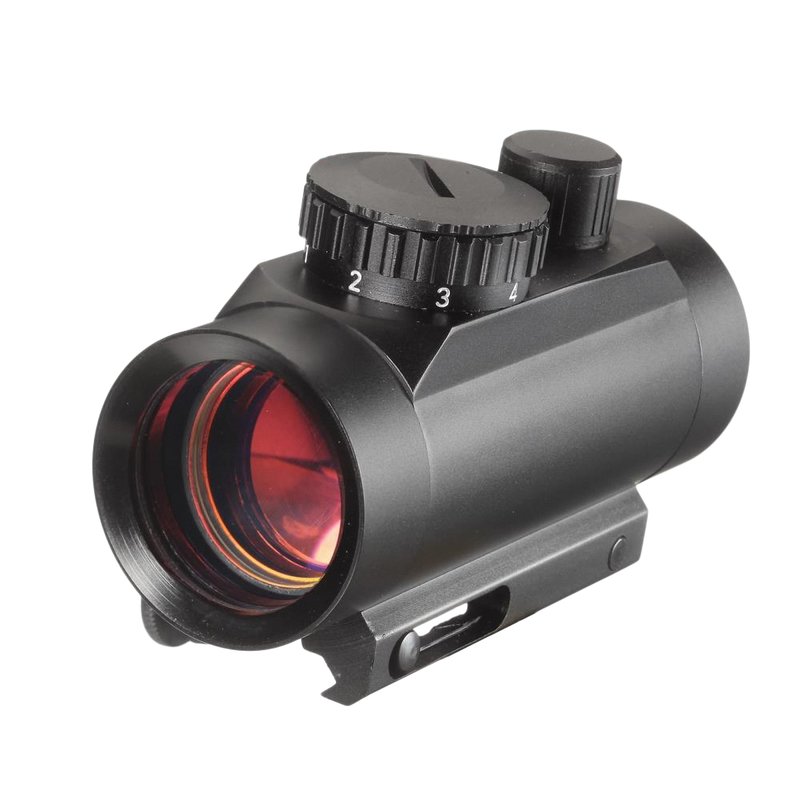 Assembly of riflescopes and Red Dots

The assembly of the Red Dots looks similar. Also here you have to pay attention to the right size for the respective visor rail. The small difference to the rifle scopes is that no additional scope rings are used. The required mounting elements are usually already fixed to the Red Dots. Thus, when buying the Red Dots, one has to make sure that the respective model fits the sight rail of the crossbow. A subsequent correction is no longer possible here through the exchange of scope-rings.


What does the information on the riflescope mean?

If you have decided to buy a riflescope, you will sooner or later come across various cryptic information such as 4x32AOE or 3-9x42 on the riflescope. Understandably, this information can easily irritate the beginner. Therefore, we would like to clarify and support you in this matter as well.

With the example 4x32AOE we would like to explain to you the individual components of the designation of the riflescope. Let us begin with the first part up to x of the designation (4x32AOE). The 4x stands for nothing other than the magnification level of the respective scope. The targeted target is ,therefore, four times larger.

In some cases, more information can be found in the last part of the name. In our example, the appendix 4x32AOE is at the end. The AOE specification says nothing else than that the reticle of the riflescope is to be illuminated and thus produces a better contrast in poor lighting conditions.

We are happy to help you

Do you have any more questions that are burning under your nails? Whether riflescope or other topics around archery or the crossbow. We are at your disposal at any time via our support centre. You will also find helpful tips and tricks as well as explanations in our FAQs or on our  BSW-Archery YouTube channel.