When shooting with a compound bow, a mechanical release aid is almost indispensable. The release of the bowstring must be as fast and as clean as possible for precise arrow shootings. A release for compound bows can do what even a professional shooter's hand can barely do: it releases the string quickly and straight, so that lateral oscillation can hardly develop when the bow is moved forward. 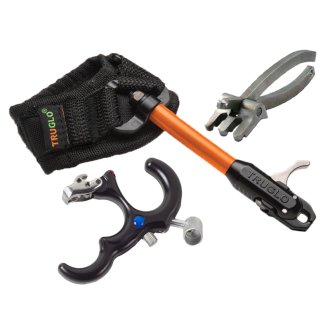 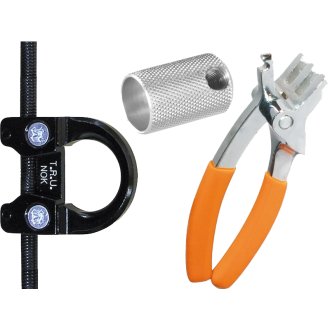 In addition to high-quality releases, BSW-Archery offers both compounds and recurve shooters everything they need for their shooting. We have a wide range of first-class sports bows, recurve bows, compound bows, longbows, crossbows, limbs and essential archery accesories such as arrow rests, arrow pullers, clickers, tabs, shafts and slip protection for all archery enthusiasts.

In principle, each release for the bow works in a similar way. At the release, there is a claw into which the string loop is hooked. The shooter decides for himself when to release the string by pressing the trigger. The only exception are back-tension releases, where the mechanism is triggered by a certain motion sequence that releases the string quickly and cleanly. Three types are distinguished according to their release mechanisms. So every shooter can find the right one.

he plier's release is particularly safe and is often used by even less experienced archers. The strap is attached to the wrist so that the release cannot be accidentally released. The release mechanism is operated with the finger, similar to a trigger on a rifle.

When using a thumb or trigger release, the backup is triggered, as the name suggests, with the thumb. For optimum convenience, the pressure point can be set for most releases. This gives the shooter optimum control when aiming and firing. Cascade releases, on the other hand, only release when the previously secured trigger is released. However, the movement of the thumb must be opposite to that of the pull arm.

The backtension release is ideal for more experienced compound shooters. It adapts to the natural motion sequence and can be individually adjusted to the power of the respective archer. The principle by which the shot is released is based on certain movements: Either the angle that the release has to the string can be easily changed or the shooter increases his back tension and the pulling power and the shot is released. This release is a must for every professional compound bow shooter.

Since bow shooting should be as intuitive as possible with the release, the choice of the right model is particularly important. It should adapt optimally to the archer and his/her movements. With BogenSportWelt.de you will find high-quality releases from numerous manufacturers such as ALLEN, STRONGBOW, COBRA, JIM FLETCHER, SCOTT, SPIGARELLI, SPOT-HOGG and CARTER. With the products of these manufacturers you can discover both a simple and solid hand strap release for beginners as well as excellent Backtension-Releases for professionals.

Jim Fletcher offers excellent hand strap releases also for professional archery. The Carter and Scott have specialized in first-class target releases and produce them in various versions. So you can find exactly the release that fits your technique perfectly.

Jim Fletcher offers excellent hand strap releases also for professional archery. The Carter and Scott have specialized in first-class target releases and produce them in various versions. So you can find exactly the release that fits your technique perfectly.