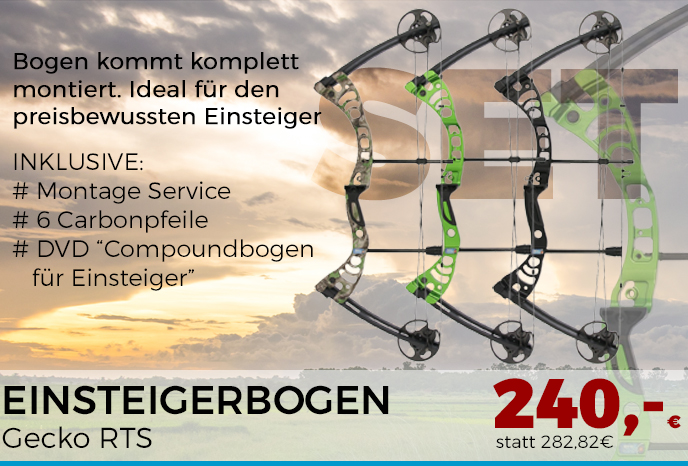 The compound bow as a complicated, highly technical construction may seem a bit intimidating at first glance, but for technology enthusiasts, a compound is therefore particularly fascinating and exactly the right choice. As a beginner you are easily overwhelmed by the abundance of bows and accessories. But the compound bow convinces with its extremely modern design and high arrow speeds. The let off caused by its cams saves you your strength and you can calmly set your sights on your next goal.

To make it easier for you to get started and choose the right compound bow for you, we've put together some great sets that you can use right away. Especially for beginners, many well-known manufacturers offer great bows that grow with your skills due to their high variability. The draw length and strength of the draw weight can be easily adjusted to your needs at home without your own bow press, and you can also enjoy your bow for a long time during fast training progress. You can even take "Ready to shoot" literally with our bows: Simply order & then start right away and get going!

To find out your draw length and arrow length, check out the video tips on our Youtube-channel. You can have technical terms explained to you in the Compound-ABC and for all open questions to arrow and bow, target and suitable protective equipment we are at your disposal under our hotline +49 (0)3971 241960 or via our support centre. So you too will soon become an experienced compound shooter!

In fact, it takes a lot of effort to recognize a sports bow in this highly technical device. Cables, string and pulleys at the ends of the limbs and the futuristic design make it difficult to find similarities to what you would expect from a typical bow. Thanks to its fancy appearance, even comparisons with a bicycle that were not meant to be serious were long in coming. But if you take a closer look at this special model of a bow, you will quickly become familiar with the finesse as well as the technical features and advantages of the compound bow.

For this reason, it is no wonder that the compound bow began its triumphal march after its invention in 1966 and has since become one of the most popular types of bow.

But why is that? The compound bow looks very special. You can see that at first glance. However, the actual persuasive work is provided by the special interaction between the individual components of the compound bow.


What exactly is the compound bow?

Should you ever have the opportunity to hold a compound bow in your hands, you will quickly become aware of its compact design. With a bow length between 30 and 40 inches, the compound bow is only about half the size of a typical long or sporty recurve bow. In addition to the short bow length, you will also have noticed the unusual rollers at the ends of the throwing arms. These reels are called cams. And these so-called cams probably have the greatest influence on the special characteristics of the compound bow.

But before you can feel the superior characteristics of the compound bow, this bow must first be pulled out. Until then there are no big differences to the other bow types. The compound bow can only pass on the energy to the arrow that was previously stored in the limbs when the bow was pulled out.

The greatly reduced draw weight in the full-draw length allows you to keep the bow much quieter. So, you can fully concentrate on your technique and the target. The advantages of a compound bow are obvious. The Let-Off and the various possibilities to assemble various add-on parts like visors, arrow rests and stabilizers make the bow one of the most precise bow types.

But which compound bow is it supposed to be? The big manufacturers like HOYT, BowTech, PSE and FRED BEAR spare no expense and effort to win you over with their large selection of compound bows. Great designs, better and better performance data and new features don't make your decision any easier. That's why it's inevitable that before you buy a compound bow, you'll find out what's right for you.

Before you start, you should know what actually makes a good beginner compound bow. Together with a reasonable price and a convincing craftsmanship, the compound bow should above all be very variable. This means that the compound bow can be optimally adjusted to the shooter without the shooter knowing beforehand exactly which specifications are optimal for him. In addition to a high setting range of the draw weight, for example 5-60 pounds, the pull-out can also cover a wide range of possible settings.

In addition to the great adjustability, you should also make sure that the compound bows have a so-called RTS set. RTS stands for "Ready-to-Shoot" and tells you that the compound bow comes with an extensive set of accessories tailored to the bow. So you can get started right away and don't have to worry about procuring additional add-on parts and accessories.

Besides the popular beginner set Shadow Rex by STRONGBOW, the Infinite Edge Pro by BowTech, the Stinger Extreme by PSE and the FRED BEAR Cruzer G-2 are especially popular. Top workmanship, many accessories and high adjustability make these models the first choice for demanding compound bow novices.


How does one shoot a compound bow?

You may have noticed that a compound shooter usually uses a small tool to take his bow off. The compound bow is not pulled out directly with the fingers, but with a so-called release. The release is similar to a small pair of pliers that can be opened with a trigger. Depending on the model, the release is held directly in the hand or attached to the wrist with a sling.

But no matter which release you ultimately choose. The basic function is always the same. The release is hung in a D-Loop before the sheet is pulled out. This loop is a small sling that is centered on the string of the compound bow. The release does not reach directly into the string, but into the so-called loop. So the hooked release cannot slip unintentionally and the string is not unnecessarily strained by the use of the release.

The use of releases offers you several advantages. Since the compound bows have a quite compact bow length, the chord forms a rather acute angle in the full extension. Together with the rather high draw weight of the compound bow, a direct pulling out of the bow with the fingers would be very painful in the long run. Likewise, the fingers of the tendon would inevitably give a lateral movement when loosening. This cannot be prevented. With the release, this unwanted influence is reduced to a minimum.


With bsw-archery.eu to your Compound Bow

Naturally we are at your side with words and deeds to support you in choosing the right compound bow for you. In addition to an extensive and well-assorted range of compound bows bsw-archery.eu offers you a tailored advice, which leaves no room for mispurchases.